There’s a lot of great stuff on streaming services these days. As a connoisseur of life without cable, I’m here to (sometimes) guide you through what’s available from the 1990’s. Welcome to What’s Streaming?!?

The recently announced reboot of the beloved late 90’s MTV darling, Daria, made me nostalgic for the original show. I loved the spot-on portrayal of high school culture and the way it so perfectly captured the zeitgeist of the times. I remembered it being incredibly witty with razor sharp commentary on the pressures of bullshit conformity and teenage social norms. I hadn’t seen it in years, outside of an occasional late night viewing on MTV2 when I still lived at home almost a decade ago. It seemed like an opportune time to revisit the first season, though, in anticipation of the upcoming reboot (just the first season, cause even an unemployed aspiring writer ain’t got time for an entire series review…).

‘I WAS Daria Morgendorffer in high school’ feels like a common refrain. I’ve certainly felt a connection with her character, despite being a 6’4 white guy with no visible relation to the queen of deadpan. Her outsider observations were shared by many young teens and outcasts in the world, and provided a televised role model for those shy, smart individuals who didn’t seem to fit into the ready made molds of what an ‘ideal’ high schooler was. She was smart, sassy, and sarcastic as all hell: the living (drawn/illustrated?) embodiment of the other side of this site, Depression is Just a Sarcastic State of Mind.

Does the show hold up upon reviewing? Yes and no. It’s funny, I was entertained, and the slow recall of all the show’s characters as they were rolled out over the 13 episodes was great fun. There wasn’t a moment when I thought ‘wow, this is WAY worse than I remembered,’ which is an unfortunate likelihood when revisiting relics from my childhood. Spending time with Daria and her family (image obsessed popular girl, Quinn, and oblivious parents, Jake and Helen), her high school “friends” (including artistic Jane, Brittany, and Upchuck, among others) and the other wonderfully specific characters who filled the show’s universe was pleasant. While many of them were cookie-cutter stereotypes on purpose, they still had underlying personalities and insecurities beneath their shallow exteriors (like Kevin, who was basically a sweeter version of jock Mike Dexter). 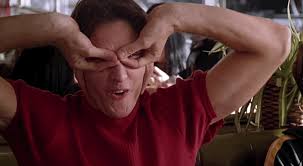 But something is missing, something that if you’re not paying too close attention to, you might not even notice. NONE of the popular songs and music that dominated the show’s soundtrack during its original run are still there. Literally, I watched the entire first season twice the past month, and I recognized two songs: the glorious theme song (about standing on my neck, la la la la la), and the former WWF tag team Too Cool’s entrance music, which plays during a random scene at the pizza place where all the Lawndale kids hang. It’s easy to miss but once you notice it’s impossible NOT to, because the long stretches of dialogue without music, diegetic or otherwise, is distracting.

It’s like the show lost its soul in translation from MTV show to Hulu binge option. You can’t entirely blame the producers and creators, since the cost of bringing back ALL of the music that originally scored the show would have presumably been prohibitive. Being on MTV during the tailend of its heyday as an actual music network gave the show carte blanche on whatever musical options its misanthropic heart desired. This was, again, part of the appeal of the show and what kept us coming back over 4+ years. So the choice to remove not just some but all musical options is incredibly deflating. Maybe they couldn’t have kept every song in there, but they couldn’t have figured out royalty payments for some of the scenes?

Take, for instance, a sequence from the popular episode, “Road Worrier,” where every high school student treks to an alternative music festival, and Daria is strong armed into driving with Jane’s brother, Trent, and his bandmate. Trent was, of course, the object of an unrequited crush by Daria, who was tongue-tied around the untalented, loser musician in a way she never was otherwise. As they sit in traffic, the camera pans between characters, each melancholically looking around and seeming to ponder life. It’s an obvious parody of the music video for REM’s “Everybody Hurts,” so much so that Trent actually spells out that parallel, saying it’s “just like that REM video” minus the knowledge of everyone’s inner thoughts (“Thank God,” flashes on the screen in front of Daria). I vividly remembered this scene, largely because it was so evocative of the popular REM video (which I also remember quite well since I was partially raised by MTV). But when rewatching it, I didn’t even realize the scene was playing out or notice the change in the musical cue until Trent makes his comment. It was frustrating, because it WAS like that video, and a crucial component of establishing that connection was the ACTUAL SONG playing.

Maybe I’m overreacting or overselling the impact of the song changes in watching Daria now versus its original televised run. The show is still clever and well-written, with the aforementioned deeper-shaded characters than would seem on first glance. But I don’t think I am. The show is still good and enjoyable to re-watch, but it’s missing that extra something that made it so impactful back in the day. There are far worse strolls down memory lane than revisiting Daria and the gang, just don’t be surprised if you leave the experience feeling a little bit empty.